When we drink contaminated tap water, the toxins are partially filtered out by our liver, kidneys, and digestive system. Steam from a hot shower though contains 80x the levels of chemicals that when inhaled, enter directly into the bloodstream. Chlorine and most other contaminants vaporize faster and at a lower temperature than water, so harmful exposure is inevitable when taking a shower.

Unlike other dechlorinating shower filters, the Pono Revival Shower Filter is specifically engineered for efficiency and performance. Tap water is passed through several contaminant removal media to effectively remove those contaminants that are harmful when vaporized. Certified grade alkaline minerals that are filled with negative ions and far-infrared radiation will create a healthful atmosphere leaving you rejuvenated with smoother skin and silky soft hair. Enjoy a revitalizing spa-like experience every time you shower.

The Pono Revival Shower Filter is formulated to effectively remove:

Pono Revival
5.0
Based on 5 reviews

Ger Vang
03:47 19 Feb 22
Aloha,Tired from buying and re-filling water from the store?I was tried from carrying 24 pack water bottles to my 2nd floor for a family of 5 that went through multiple packs a week. In Hawaii, we have bottle recycling fees and prices of water can be expensive depending on convenience. Faucet water can be hazardous depending on where you live on the island. I knew I needed a better alternative for drinking water. After hearing about Pono Revival and Alkaline & Mineralized water, I was introduced into the best drinking water that can be readily available from home.I purchased the 12 Stage Pono Revival home water filtration system from Ken (owner). He was very friendly, knowledgeable, and easy to work with. He was willing to explain the water filtration process and benefits of alkaline water. Since our investment, the Pono Revival home drinking water filtration system has worked great for our family with no issues since we bought it 5 months ago. The system has top quality parts which are made in the USA except for the tank. We moved recently and Ken kindly provided technical support for moving the filtration system.They offer water refill stations and home water filtration systems. Additionally, Ken has quality products like their water bottles (keeps water cold/hot) way longer than Walmart brands. They also offer shower head water filtration systems. I also purchased this to prevent skin breakout and eczema for because of sensitive skin. I have since purchased 3 more water bottles for family members.You can taste the difference when comparing to non-alkaline/mineralized water. I use the water to make tea and can taste the difference. My family and friends tried the difference between store bought brands of water and Pono Revival Alkaline water and they have agreed that Pono Revival water is better. If you are ready to save time, have convenient access to high quality drinking water, you should give Pono Revival water a try!

Apollo Who
21:42 16 Feb 22
They have my strongest recommendation for all the products they have. We are in a water crisis in HI right now. Their system helped by 1000% especially within the household. Lets just say the taste is AMAZING! The filtertrations systems will get rid of everything. We used the Shower filter and it even got rid of petroleum/chlorine smell the entire time the crisis is happening (The H2O test with the shower did not find anything deadly so this is based off my useage conclusion). So without further ado, their filtration system will help protect those in your household and the taste in the water will keep you feeling healthier by the day. CALL, TRY AND GET IT!From a Active military customer!

Kue Lo
21:24 13 Feb 22
We are currently going through a contamination of water in our home and decided to try Pono Water, which was the best choice ever! and convenient! their water is great for cooking, we use it for our new baby, and the taste is fanastic and fresh!! They also provide other kinds of filtration for your home. We currently are using their shower head filtration and it's been a life saver! with everything our home is going through. We highly recommend their goods and services!!!

Jonathan Molina
00:37 11 Feb 22
Before Pono Revival, I remember drinking just "regular filtered water" like everybody else, never really thinking about it but one day I met Ken (the owner). He was very knowledgeable in how water is filtered and how it can be acidic, chemically treated, inadequately purified, or bottled in plastic for years. After he made me aware of these things, I started thinking about how this whole time I've been putting these things in my body. Being a martial artist and an active runner, water is always by my side and is really the only thing I drink besides coffee.After learning that high alkaline, ionized, and hydrogen-rich water is better for my health I decided to invest in one of their under-the-counter systems. The water tastes great (even better when it's cold) and it doesn't have that tap water taste whats soever. Through their 12 step purification stages, my drinking water is filled with the things I need to keep me healthy, energized, and ready for my training. The shipping was fast (HI to CA) and it arrived within the same week, I also picked up a cool water bottle and invested in a showerhead system. It's nice knowing that the water I wash myself with is cleaner than the tap water I've been showering in for years. After all, the skin is the largest organ and it absorbs some of the water you bathe in, might as well have it absorb something cleaner.Overall my family and I are very happy with the knowledge, the systems and the water Pono Revival has provided us with. Great tasting water right here at home.

krystal aguirre
03:24 10 Feb 22
It's been about a year since we invested in their shower/water filter & I highly recommend their products. A family member who had eczema used it & found themselves itching less.Great local company located in Ewa Beach, Hoopili. They even gave us a detailed & thorough presentation of how their water system works. Two thumbs up!!
‹
›

Designed and manufactured in California, USA, the multi-functional Pono Revival Shower Filter is formulated to provide maximum reduction, if not removal, of chlorine, chloramine, fluoride, heavy metals such as lead, mercury, nickel, chromium, other dissolved metals, and 300+ other contaminants while controlling scale, bacteria, and algae. 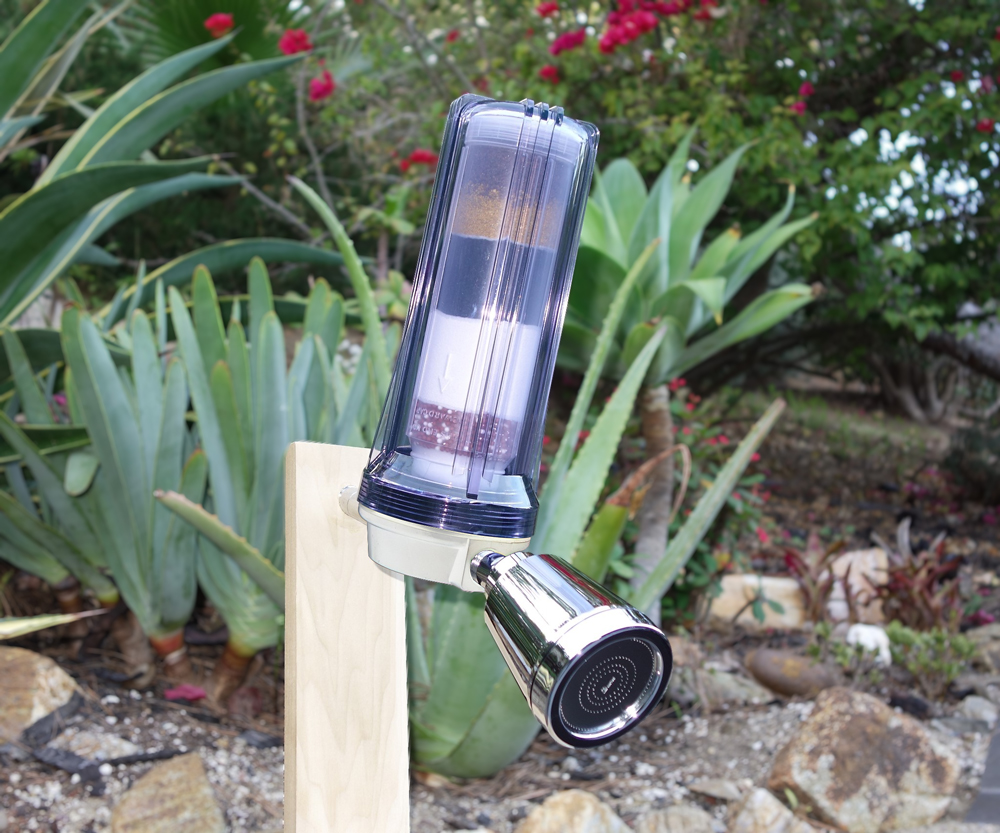 STEP 1. Remove your existing showerhead from the shower pipe. This should just unscrew. It may be a little tight due to age. You may use an adjustable wrench to unthread the top half of the showerhead from the shower arm pipe.
STEP 2. Wrap the enclosed Teflon tape tightly around the exposed pipe; this helps to seal the connection between the new shower filter and the pipe (to prevent water leaking).
STEP 3. Remove your new shower filter from the box, and unscrew the white cap from the clear housing.
STEP 4. Attach the new filter white filter cup to the shower pipe by screwing it around until it is tight and sitting upright as shown in the picture. 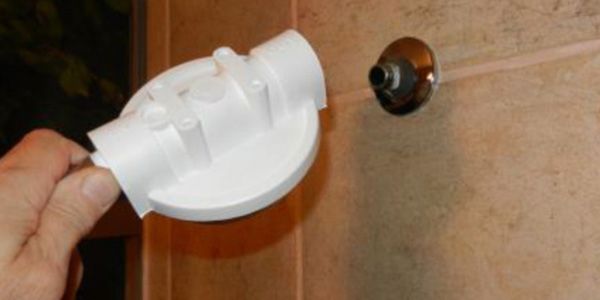 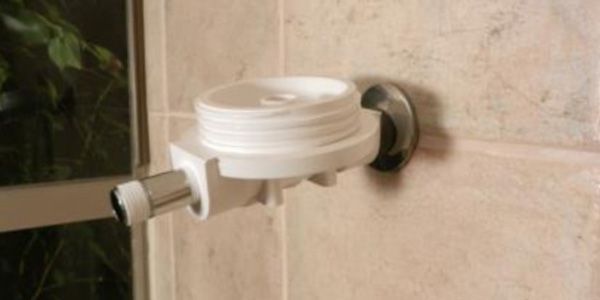 STEP 5. Hold shower filter cartridge and clear housing to shower arm, carefully aligning the threads, and twist in a clockwise direction until hand tight. Pay close attention to thread alignment during this step. Cross threading the shower filter to the shower arm may damage the unit. The inside cartridge should be oriented with KDF media (gold powder media) upright. 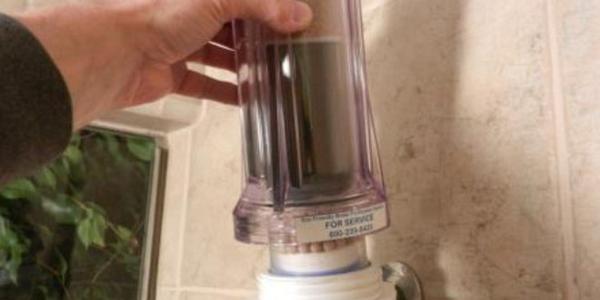 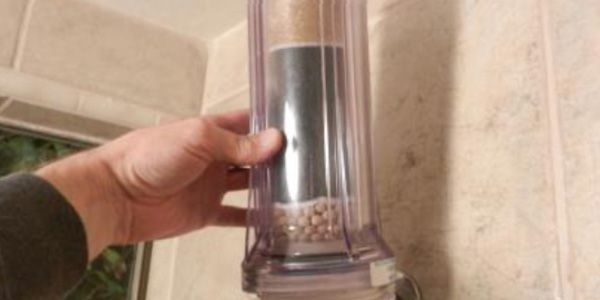 Note: Be sure to double-check the condition and placement of the gasket that is included with your shower head. Worn or torn showerhead gaskets may cause leaking and reduced overall water pressure and performance.

Turn on the water and let run for 1-2 minutes to fully pressurize the inside cartridge and filter housing. Check for leaks at the shower arm, cartridge attachment point, and shower head attachment point. If leaks are found, turn off the water and re-tighten problem areas. Hand tools may be used only at the showerhead connection point. No more than an additional 1/2 turn with any hand tool is recommended.

Congratulations! Your brand new shower filter may be used and enjoyed immediately. 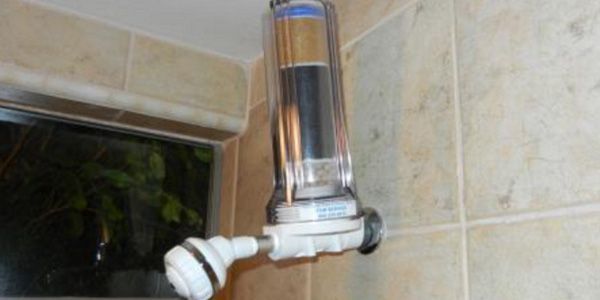 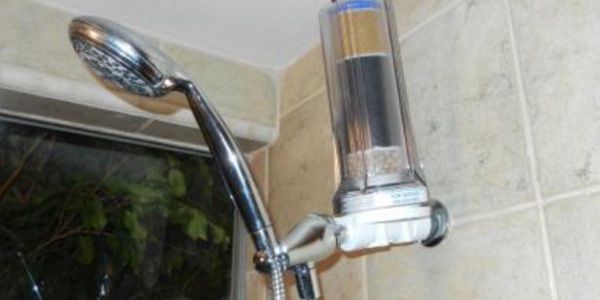